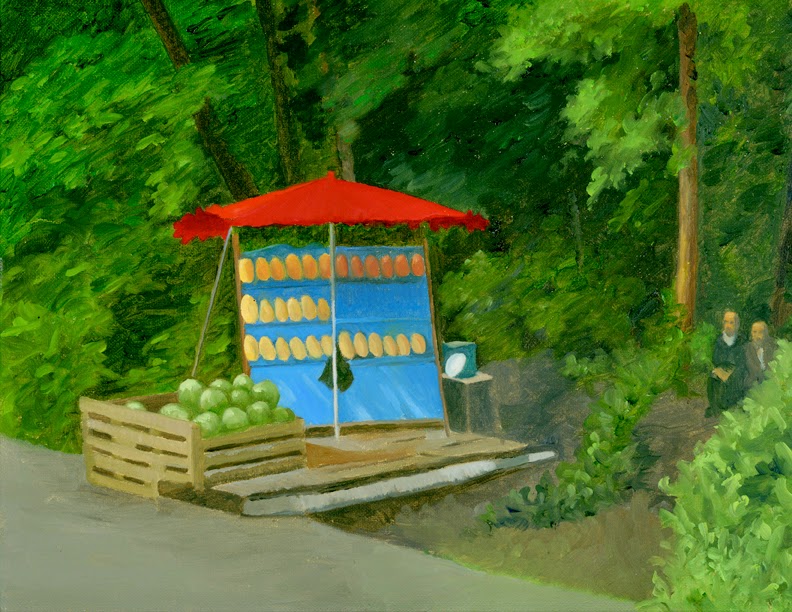 Traveling by Google maps into Russia, I was cruising down a major highway looking for something to paint when I came upon this colorful roadside stand and two bearded gents peering out from the forest waiting for customers.  Looks like something from a Russian novel.

Posted by postcardsfromthemainline at 7:24 AM 2 comments: 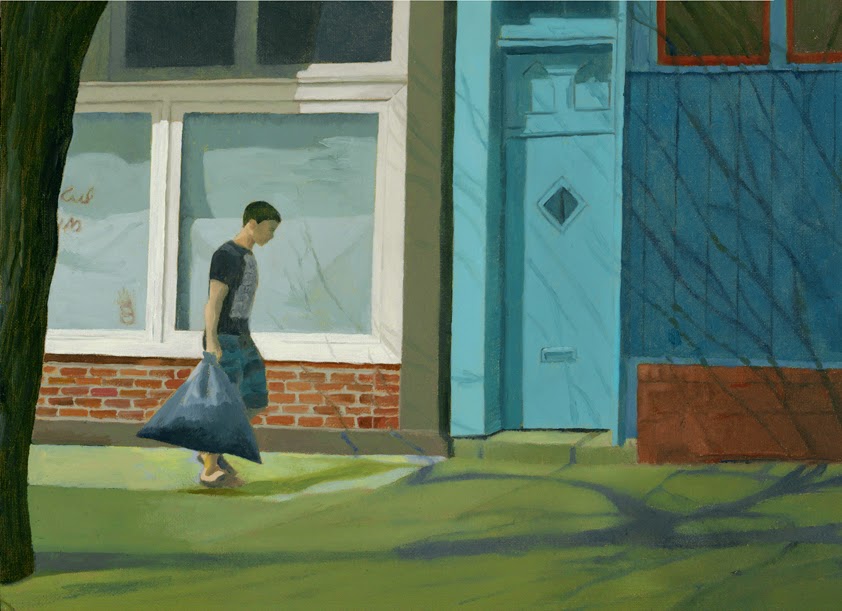 'Trash Day' is finished and dry.  After all the choices I found in Photoshop I ended up painting a piece of the photograph pretty much the way it was minus the trash barrel.  The dramatic tree shadow will have to wait for a square canvas.  I am pleased with the outcome.  The boy seems somewhat burdened by his load of trash but cozy in the sun with the tree pushing him forward into the net of shadows.

Posted by postcardsfromthemainline at 8:24 AM 4 comments: 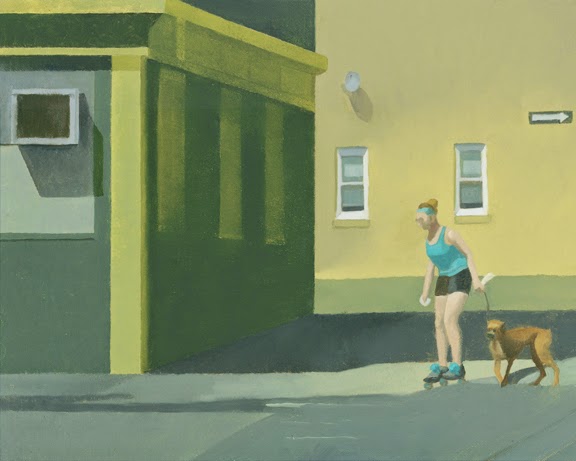 While I am removing the barrel from the 'Boy with the Trash' painting and it is drying, here is the painting I did before that one.
I had a hard time deciding what to call this one, as you might imagine.  It is an odd subject but it fits in with my objective of catching everyday activities.
This girl is caught, first of all in the space.  Second she is caught in the duty of walking her dog when she would probably rather simply be roller skating down the street. Third she is caught in the civic responsibility of cleaning up after the dog.  Third I caught her, all dressed in her matching outfit with pom poms on her toes,  in the always embarrassing act of picking up dog poop.

On to the canvas (process)

The next thing I do is to trace the outline of the painting on to the canvas using graphite paper.  In the first shot you can see the lines on the right.  (I began painting before I started this series so I don't have a picture of the whole drawing but you get the idea.)
I start painting at the upper left hand corner and work to the lower right hand corner when I paint.  This leaves room for my hand to rest on the canvas without getting paint covered, as these are small paintings and I work with them on a table not an easel.  I need a steady hand as the details are small.

This is not the way one is "supposed to paint".  The usual method suggested in art school is to begin the whole painting at once going into the dark areas with thin paint and working all over the canvas at the same time, gradually getting thicker and thicker and into the lighter areas.

I have painted this way and when working outside must use this method.  However, I really enjoy the 'coloring book' method much better.  There is something soothing about simply going along inch by inch filling in until you get to the end.  It requires patience and a sense of the whole while you are working and of course I must go back and edit sometimes.  In this case I am having second thoughts about the trash barrel.  I like the way the boy is pushed by the tree but the barrel is an awkward, heavy shape and maybe I will paint it out.  I can eliminate it in photoshop and see what I think before I do that.  We'll see. 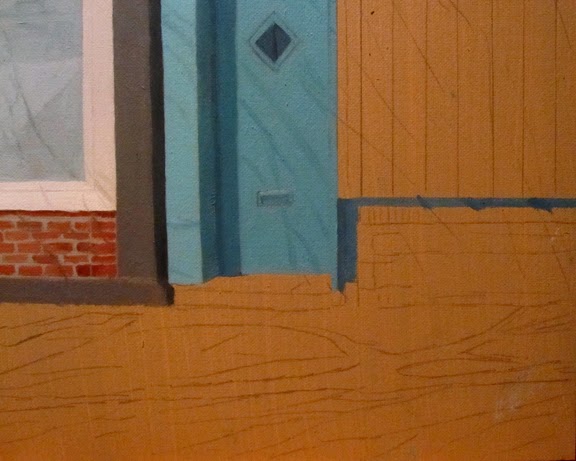 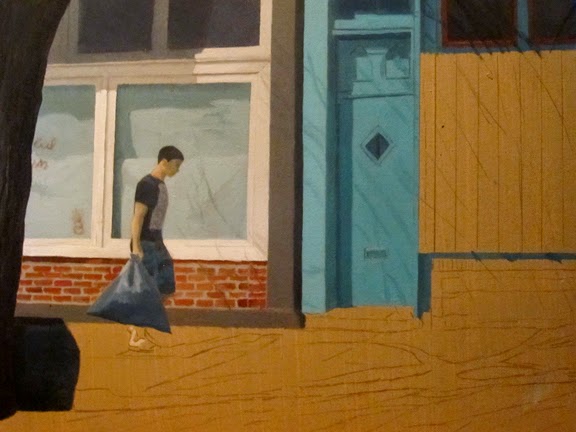 Posted by postcardsfromthemainline at 9:27 AM No comments:

Too much information in yesterday's version so I moved the boy again, this time right into the blue green area.  I like this but  - whoops it's not the right size and if I'm going to go with the shadow I want the whole tree shadow.  That would make a nice square painting - but I don't have a square canvas so that composition too is for another day. 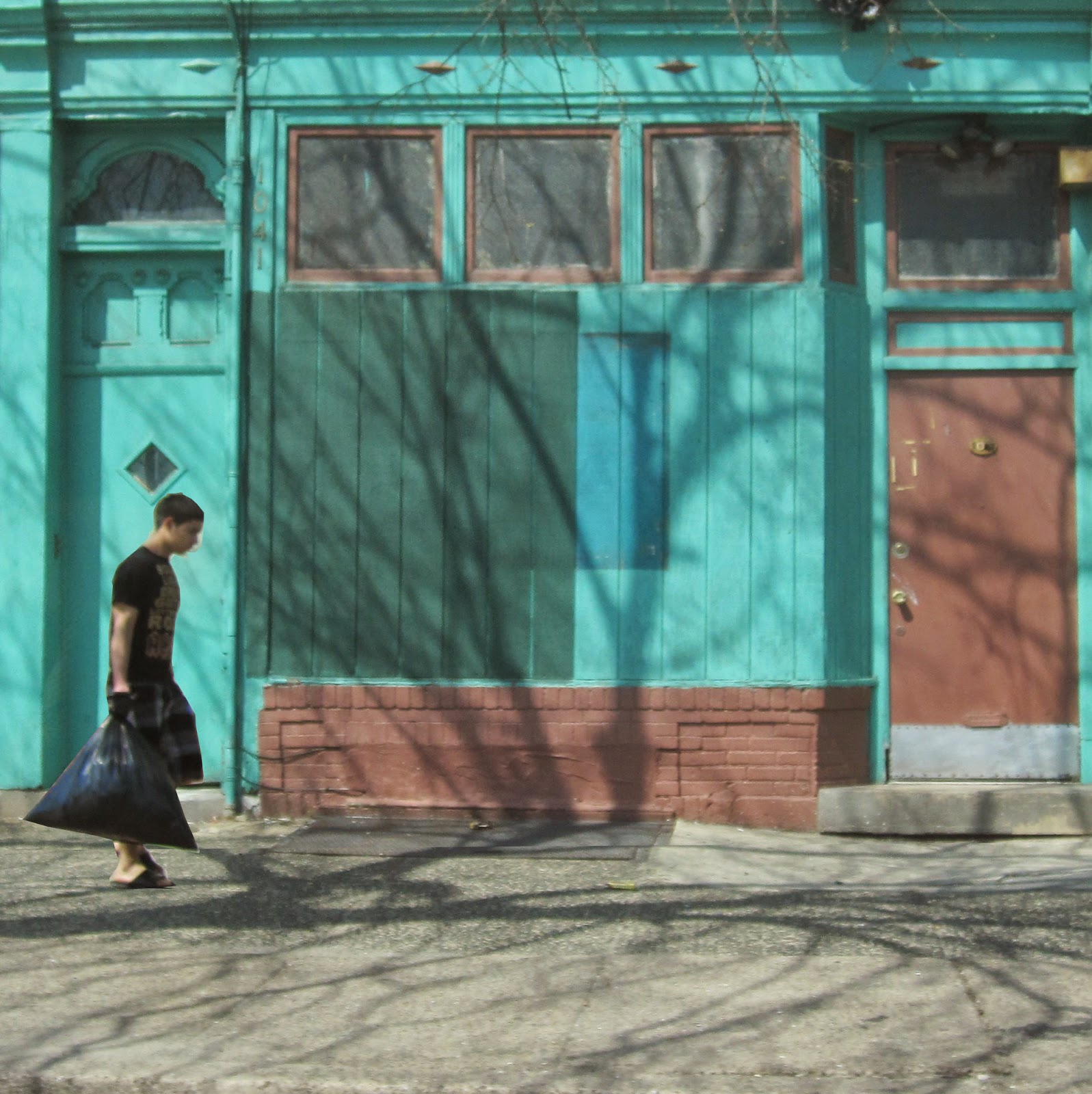 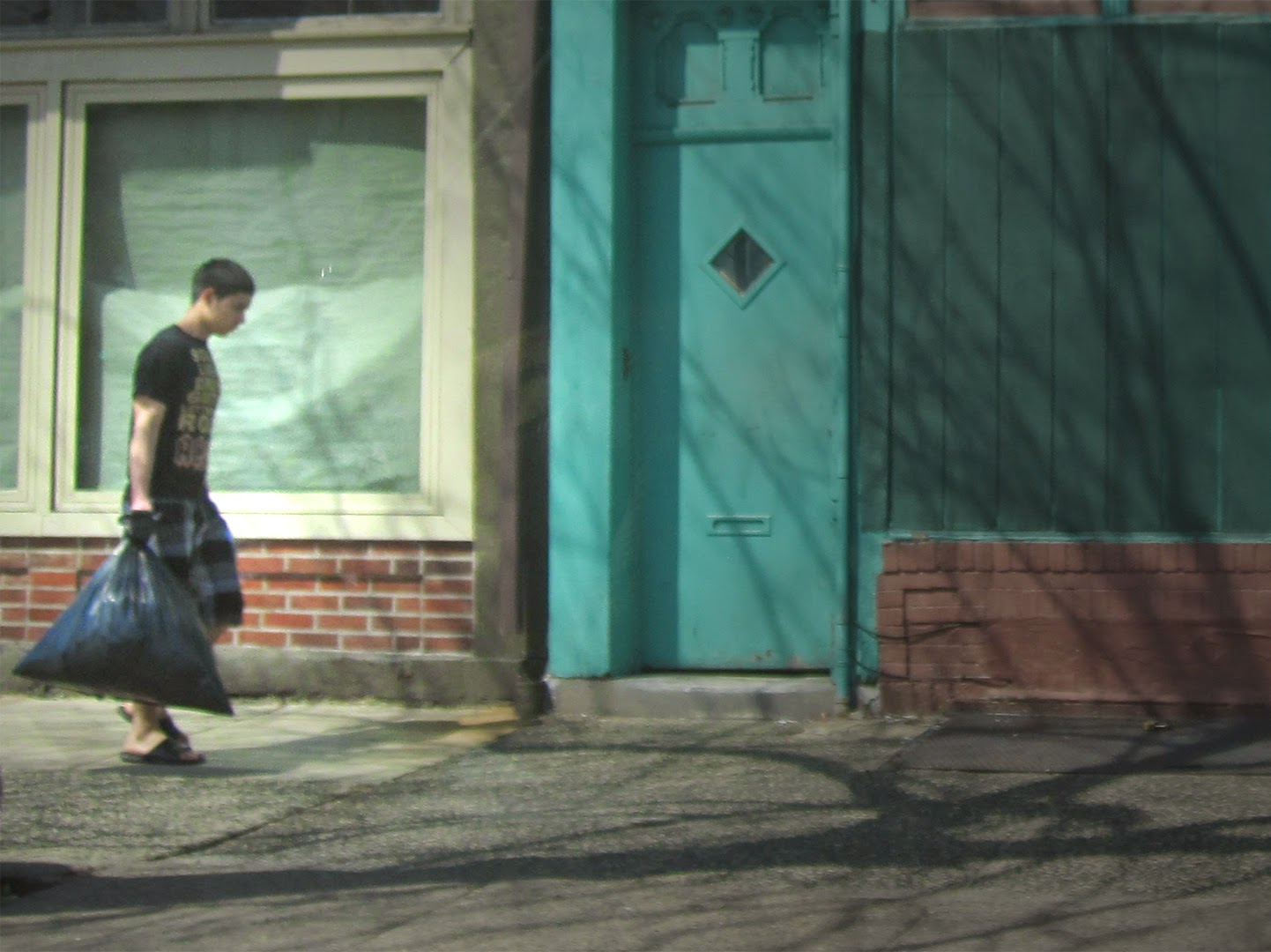 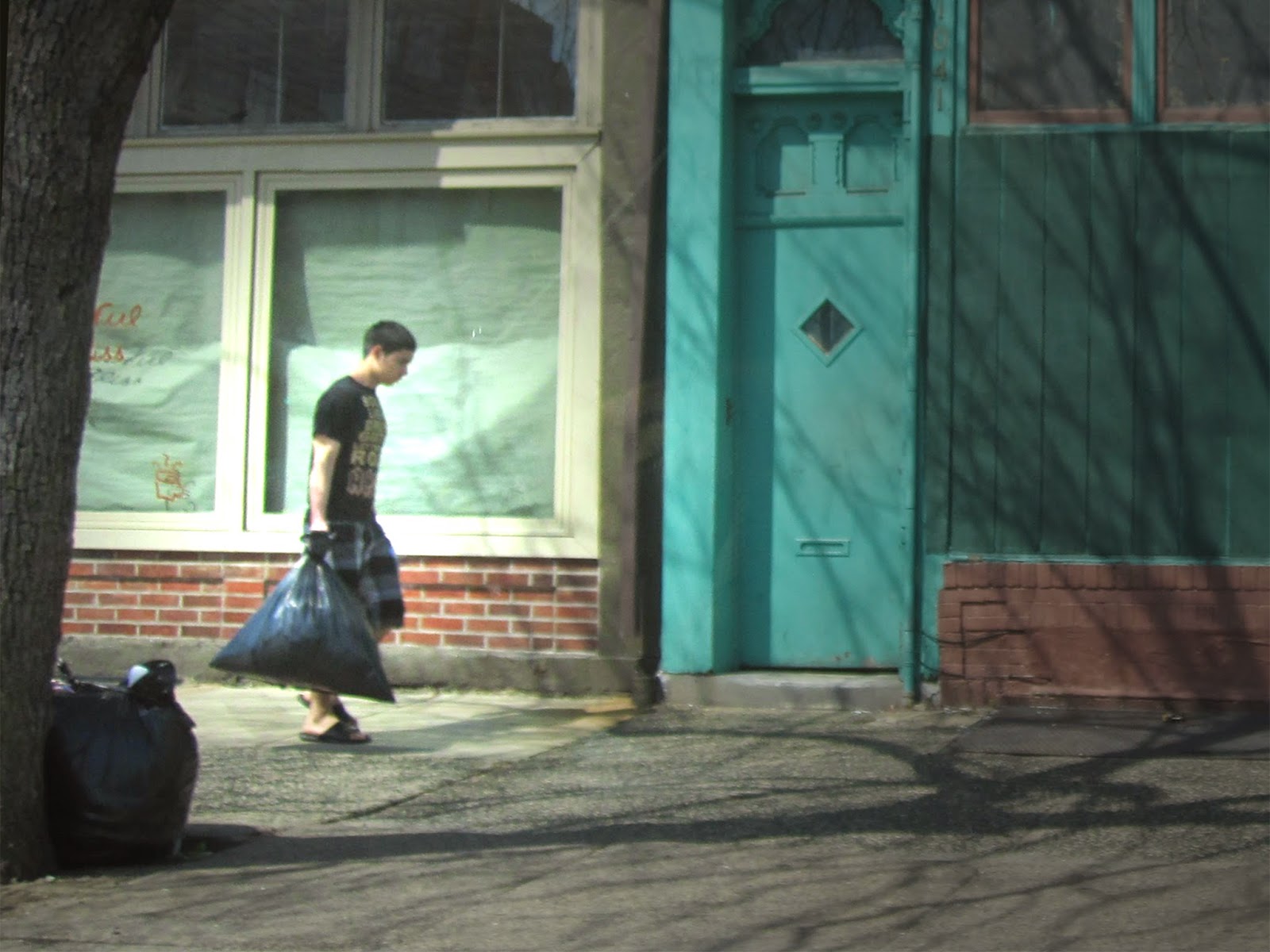 Posted by postcardsfromthemainline at 7:56 AM 2 comments:

I have had a couple of requests for more info about my painting process so here is the second installment.
In recent years I have been painting from photos so let's go with that.  First I take a lot of pictures with my little Canon Elf.  The latest group that I am working on were taken from the car window as I rode around Philadelphia because we were caught in a traffic jam on the river drive.  I took the pictures when we stopped for a light or stop sign, somewhat at random.
The first shot is one of these.  I think I was aiming at the shadows on the wall but got the bonus of the boy with trash.
I downloaded the photo into my computer and opened it in Photoshop.   The first thing I wanted to do was straighten out the buildings.  I used "filter" and then "distort" for this.  Next I moved in and eliminated some of the building and moved the boy forward in a complicated combination of "copy, cut, paste, erase and move" for the boy and then "copy and image size ( in edit )" for the background of the boy.
Why did I want to move him forward?  Not sure, just did.  It was something about the combination of shapes and the way he was heading into the blue green area.  Then I wanted a little more atmosphere so I adjusted the light situation with "Filter, Render, Light Affects, omni."  This was a little too light on the right but I knew I could adjust that when painting and I liked the feeling.  However it was much too much information for the 9" x 12" canvas I had ready to go.  It should be a larger painting.  Tomorrow next version. 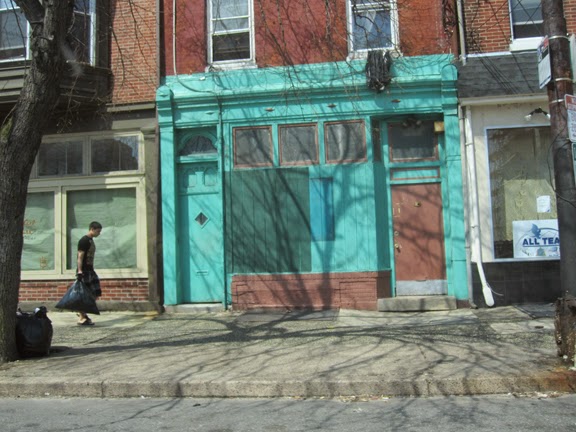 Time to begin a new group of paintings.  I am starting with a pack of 9" x 12" canvas panels.  Just a bit larger, but I am thinking of these as possible plans for larger work.  First I cover the white canvas with a warm beige beginning.  I cover all the panels at once using a quick drying white as the base.  It is a sunny day so I put them all on the roof outside my 3rd floor studio window to dry.  I don't want the aroma in my space.
.

When I climb the stairs to this sanctuary I close the door and leave the phone and the computer behind.  Just me and my mess and whatever order I can make on the canvas. 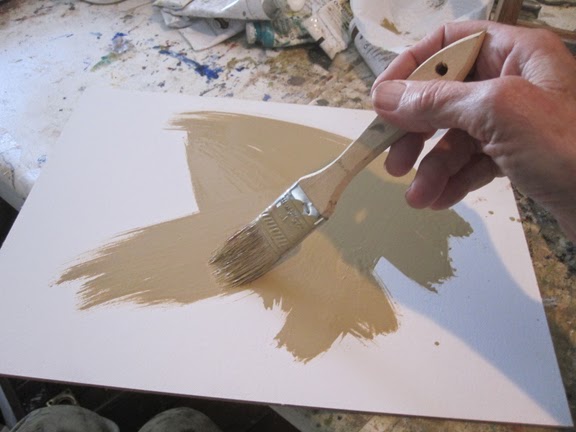 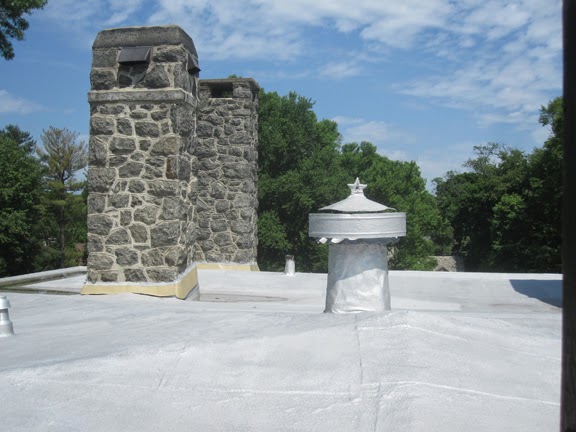 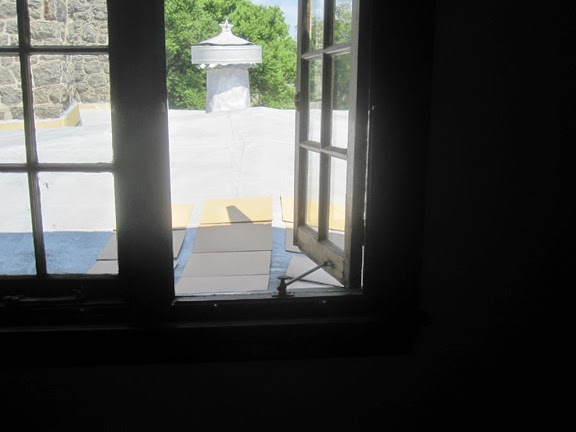 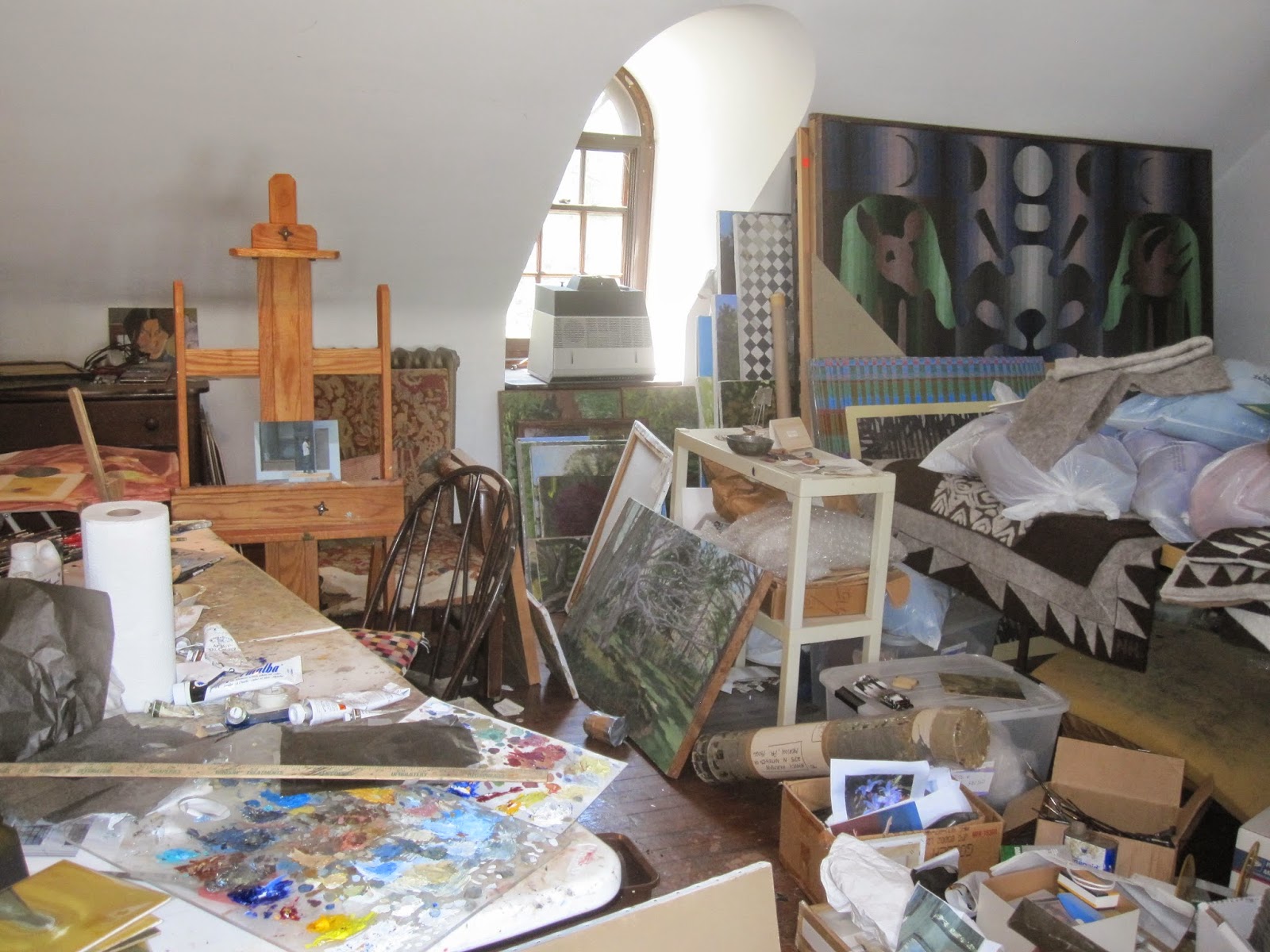 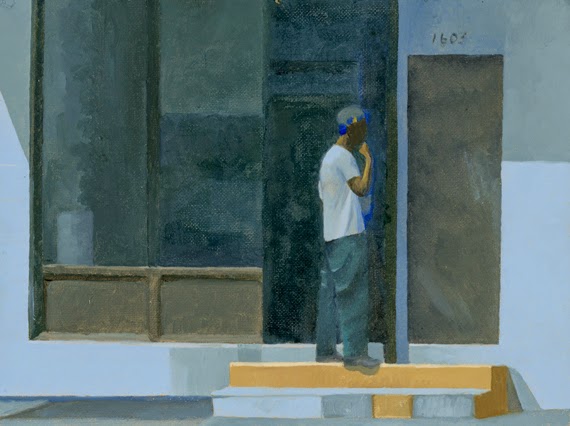 After being away from painting for a month and a half while finishing my web site and gardening I have had plenty of time to think about what I am doing with paint.  One of the things I want to do is paint larger.  So this is my last 6' x 8" painting, at least for a while.

Also I have very few paintings incorporating figures, but I would like to do more of that.  How do we fit in?  What are we doing here?  A lot of the time we are alone talking to someone on the cell phone not aware of our surroundings, but we are none the less caught in the shapes and smells around us.

Posted by postcardsfromthemainline at 7:47 AM No comments: