In Canada and Greenland, the term Eskimo has largely been supplanted by the term Inuit.  While Inuit can be accurately applied to all of the Eskimo peoples in Canada and Greenland, that is not true of Alaska and Siberia.  In Alaska the term Eskimo is commonly used, because it includes both Yupik and Inupiat.  Inuit is not accepted as a collective term and it is not used specifically for Inupiat (although they are related to the Canadian Inuit peoples)  In US and Alaskan law the words Alaskan Natives cover all tribes.
These natives have survived for centuries under the harshest conditions.  Although electricity has arrived in some areas of the far North, there are still not roads and supplies must be brought in by air.
I have looked at several videos about the life of Native Alaskans and I think THIS one, which is only 20 minutes long seems pretty authentic.  It is an old black and white film not sure when it was made and can’t seem to find out. 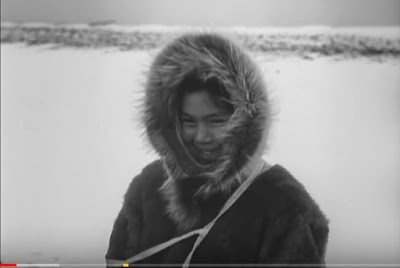 Posted by postcardsfromthemainline at 4:03 PM No comments: