Certainly no information about Alaska would be complete without an examination of its purchase by the United States from Russia in 1867.
Although Native Alaskans had lived in Alaska since around 30,000 BP (before present), and the Russians had only been there since the mid 18th century, they claimed to own it.  And the United States agreed that was the case and paid 2 dollars an acre to purchase it from them.  The $7.2 million paid would be about $105 million today.
The Native Alaskans had no centralized government to object to any of this and so they tacitly agreed to be “owned” by the United States.  U.S. Secretary of State William H. Seward signed the treaty with Russia.  The deal was unpopular in many quarters and so it has been known as Seward’s Folly ever since.  Certainly it was the best bargain in World History as Alaska is rich in an abundance of natural resources including gold and oil but, also being bordered by 3 great oceans there are rich fishing grounds and the potential for water power.
Here is a interesting little tid bit that sounds similar to some of the shenanigans going on presently with the Russians.
"Finally, in July 1868, after Johnson lost the Democratic presidential nomination, the House of Representatives voted 113-43 to hand over the money to Russia. A congressional investigation later determined that Stoeckl, the Russian minister, bribed lobbyists and journalists during this time period. Private notes written by Johnson and another U.S. official suggest that Stoeckl—with Seward’s knowledge— likewise made tens of thousands of dollars in illicit payments to members of Congress.” from THIS DAY IN HISTORY 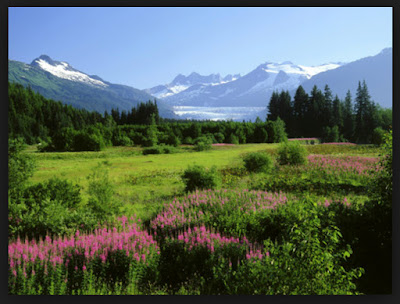 Posted by postcardsfromthemainline at 5:32 PM No comments: