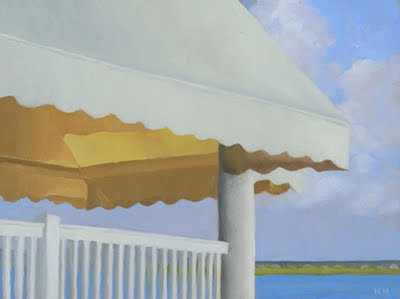 WHITES
Nancy Herman
8" x 6"
oil on canvas board
Every summer when I was growing up we went to the seashore to my grandparents house across from the bay in Ocean City for a month or so.  Various combinations of aunts, uncles and cousins sat on the big, wide porch for hours.  It was on the second floor of the house looking over at the bay.   When the awning was up and we could see the sky my grandfather would comment on the weather.  Such gems as, "If there is enough blue in the sky to make a pair of pants for a Dutchman it will clear."
When the awning was down the adults would comment on the people who lived across the street and the boats that went by.  Sometimes my grandmother would play Go Fish with me, but otherwise it was an adult world.  The most exciting thing that happened was if I was allowed to put the awning up or down.  There was generally a calm controlled feeling to these lazy days for me.  Who knows what was going on in the hearts of the adults assembled there, with all of their passions held carefully in check in order to preserve the required decorum for the oldest generation.
$125.00
Posted by postcardsfromthemainline at 10:14 AM 1 comment: