Yesterday I participated in the first Chestnut Hill Plein Air Festival.  There were around 50 artists dispersed over several blocks of Germantown Ave.  We were assigned a specific block and a specific side of the street.  We could begin at 8:00 with a blank canvas and were to be finished by 4:00.  It was a contest and judging was to take place at 4:00.

I signed up for this work because I have not painted outside for many years and I knew if I signed up I would have to get out there and do it and I wanted to get back to that taxing but rewarding approach to painting.

So, last week I went to Chestnut Hill on two occasions to check out where the sun was in the morning and the afternoon and where I could stand that was under a tree.  I have an umbrella that can be used if there is a place to stick it into the ground but I didn't see anywhere with ground accross from a place I wanted to paint.

While I was there I took some pictures of possible spots, as this was part of the possibilities permitted by the rules of the contest.  I decided to get some practice in before the actual event but did not want to sit on Germantown Avenue and paint so I set up my tables in the shade of my yard and painted from a photo on my iPad.  Sort of plein air.

This is the first painting.   Traditionally one would start with thin paint working probably directly with the brush (no sketch) starting with the dark areas and working gradually into thicker paint and lighter areas.  I, however, have been trying to use more paint lately and at the same time to simplify and condense my shapes.   So I make a careful sketch and fill in the shapes with juicy paint.  This is not a tried and true method for painting outside at all.  It is what I have been doing in my studio.

This painting was done with that method but painted outside.  It is a little cut off and the 9" x 12" paintings don't quite fit into my scanner. 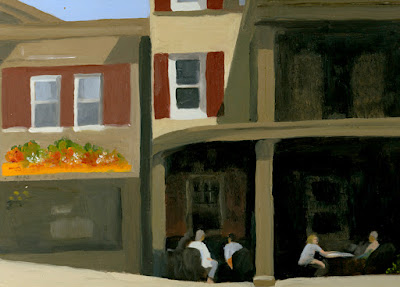 
More about the contest tomorrow.

Posted by postcardsfromthemainline at 11:16 AM No comments: