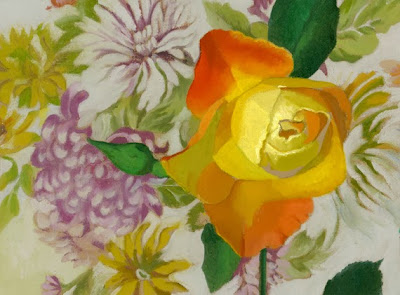 The Last Rose of Summer, forever memorialized by Thomas Moore in his poem of the same name.  At one time considered the Bard of Ireland, Moore wrote many poems that became popular songs in the 19th century.  I have listened to most of the versions of The Last Rose on utube and found Lily Pons version the most pure and lovely.
An old favorite fabric is included in the painting to embody the spirit of the dead roses.  Where else do flower memories go but into designs for fabric and paintings?
Here is s link to Lily Pons video.

Posted by postcardsfromthemainline at 8:06 AM No comments: