Fatima and the Cowboys

Here is the second in the series 21st Century Artifacts, FATIMA AND THE COWBOYS.

Posted by postcardsfromthemainline at 1:37 PM No comments:

One day, after applying several filters to some stripes while playing in Photoshop, I was surprised to find faces peering out at me.  I found these faces quite arresting as they were all connected and formed a pattern even though they were each a little different, much like humans.   After playing some more I found that it was possible to 'find' faces using other shapes and the results were, to my mind quite interesting.  I would go so far as to say I felt they were trying to tell me something.  This sounds a bit crazy I know and so I turned my experience into a children's book - JOE AND THE ADOBIANS - because children are allowed to have crazy ideas as they can be assumed to grow out of them.

Now after a year or so has gone by I still am interested in these faces and have decided to paint a series of them.  Crazy or not these computer people have something to say and I'm going to let them say it.
(If you went to the link for JOE...the voice on the promo is my grandson Luke Herrine.)

Here is the first one.  I am calling this series 21ST CENTURY ARTIFACTS. 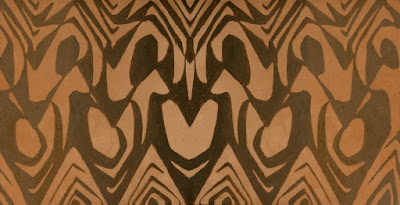 Posted by postcardsfromthemainline at 2:53 PM No comments:

I have two paintings in the Show at the Wayne Art Center presently.  In these work I have been concentrating on simplifying shapes and color to get the essence of what I want to say. 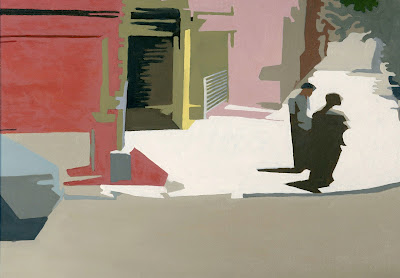 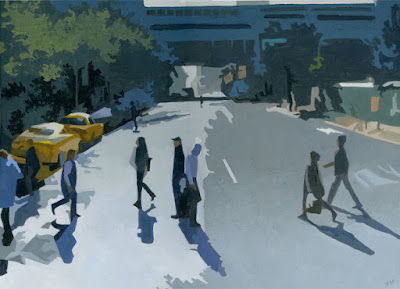 Posted by postcardsfromthemainline at 12:01 PM No comments:

Here is another of my favorite bloggers, Altoon Sultan.  She blogs about her paintings, the nature on her farm and her favorite places.  I enjoy her thoughtful writing and her interesting work.

Posted by postcardsfromthemainline at 7:22 AM No comments:

No art shows to report in August, but September began with a bang Wednesday as I traveled to the Metropolitan Museum in New York  with two friends to see China, Through the Looking Glass.  This show closes on Sunday, so if you are anywhere near Manhattan I highly recommend it.  It is a multi media extravaganza filled with ravishing costumes and art.

As soon as our little group emerged from the elevator into Gallery 980, we were in a dark room with black shiny walls and red lights.  Some of the more spectacular scenes from Bertolucci’s The Last Emperor were showing on huge movie screens and Sakamoto's score for the movie, Open the Door, played throughout the space.  We were suddenly enveloped in a dream world, and like dreams we lost our ’selves’ to the magic of the experience.  The references to Alice in Wonderland were quite apt as the sensation of falling into another time and place was thrilling.   Our own images were reflected in the black shiny walls making me feel a part of the drama and wishing I were wearing a kimono. 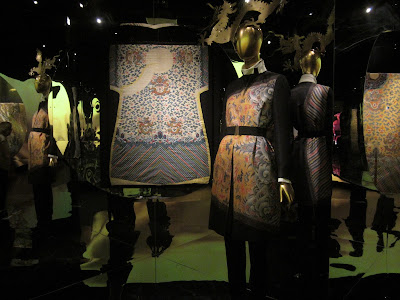 The display of gorgeous old Manchu robes were echoed by modern designed, absolutely fabulous costumes created by well known designers.  Mirrors were placed to perfectly show all the angles of the costumes and give the sensation of many versions of the scene incorporating the art with the movie. The mannequins all sported wonderful head pieces created specifically for this show by British milliner, Stephen Jones incorporating the 12 imperial symbols. Even many of the spectators had beautiful Asian, and South American faces whose high cheek bones flowing through the dark rooms along with us amplified the dream- like feel of the whole experience. 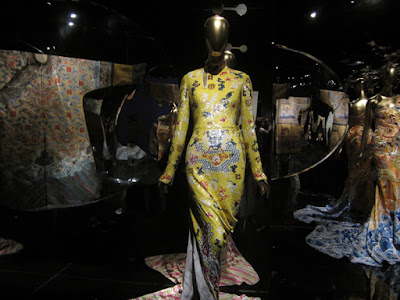 This combination of sensory input could be overwhelming, but for me it was just the right mix to crack the shell of everyday and leave me open to enjoy the beauty.  This is a tricky business.  I hope more museums incorporate this kind of theatre as tastefully as the Met has.  The whole show is curated by Andrew Bolton. Wong Kar Wai artistic director and Nathan Crowley production designer. 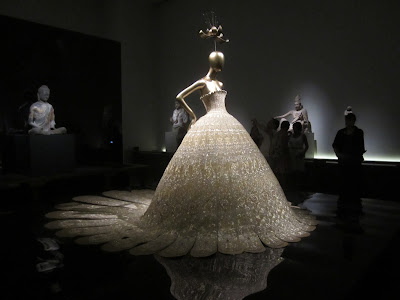 This was only one floor of the exhibit and there were two more. Here is a link that describes the others which were all quite wonderful. 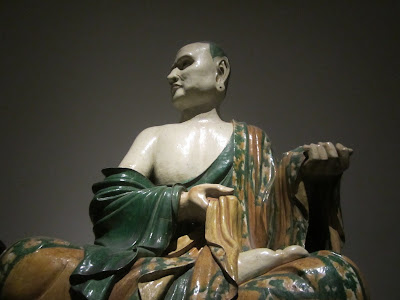 We saw the John Singer Sargent show as well but I was not particularly interested in it, after the rich experience of the China show.  I do admire the way Sargent moves from rich darks to the light on the faces of his portraits making their features sing.
However, I did find fascinating the show Navigating the West, George Caleb Bingham and the River.  This is a show about his 40 year obsession.  Bingham painted many, many paintings of the same subject, basically men on a boat traveling down the Mississippi.  How he financed these paintings and what he chose to include and omit is very interesting.  There are sketches of the characters and an infra red study of one of the paintings showing how it evolved.
It was a very full day but well worth the trip.

See you next month.  Thanks for tuning in.
Best,
Nancy
Posted by postcardsfromthemainline at 2:47 PM No comments:

Dear friends,
My computer sent out a blog from May just now with no help from me.  Sorry.
Best,
Nancy
Posted by postcardsfromthemainline at 11:36 AM No comments: