I have to admit to being a little weary of all this traveling around the country.  I will continue however with Georgia next on the list.

In the meantime I have been working on some illustrations for a new children's book.  I went to a symposium of the society of Children's Book Writers and Illustrators to learn how to get something published.  It was very interesting.  I discovered that one needs to restrict the number of words in a children's picture book to from 50 to 2500 with the less the better.  The book should be from 32 to 64 pages long.  I brought some of my previous illustrations along and was told that I should not include photos as I did with some pages from OLIVE AND STICKY BEAR like this. 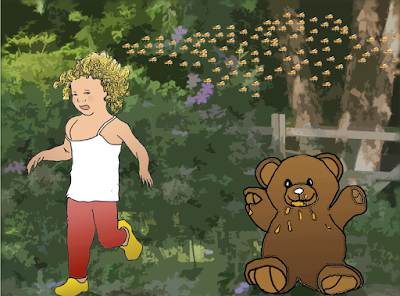 Although this critic was not too keen on digital illustrations (she is a water colorist) she did approve of the illustration below and suggested I go with my strong point, which was the addition of fabric patterns.

As in this illustration. 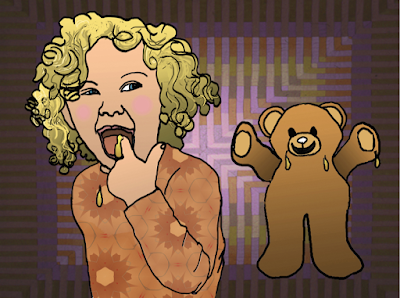 So I have tried to digest all of those limitations and recommendations and begun making some new illustrations.  All of which can now be seen on my new INSTAGRAM account which is something it is very important to have apparently.

Once I get several more illustrations for the book finished I will make a postcard to be sent to art directors from publishing houses.  Apparently you cannot send an unsolicited manuscript without an agent to anyone anymore, but the art directors will look at a postcard for as long as it takes them to walk from the mail room to their desk.  If they like it they may look you up.  If they don't, into the trash it goes.  So you have about 6 seconds to make an impression.  I think I may make several postcards and send them all the same week so if one image doesn't hit the spot the next may do the trick....and I am nothing if not an old dog trying to learn new tricks.

As I post the illustrations please let me know which ones you think might grab someone's attention!

Posted by postcardsfromthemainline at 3:02 PM No comments: