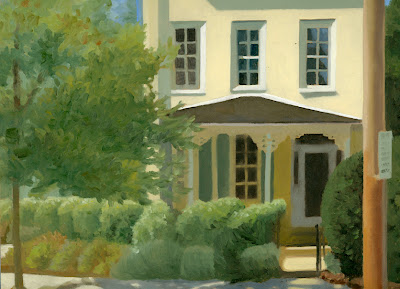 This house in Chestnut Hill seems almost to contain sunshine.  It's cheery countenance is for me a smile.  That may be because it is very similar to a house I lived in when I was growing up in the country.  My mother looked for years for a house with windows down to the floor and finally found one in Worcester, Pennsylvania.  It looked a lot like this but was in the middle of several acres that were for me a little paradise, a refuge from the sturm und drang of adolescence.

Posted by postcardsfromthemainline at 7:59 AM No comments: 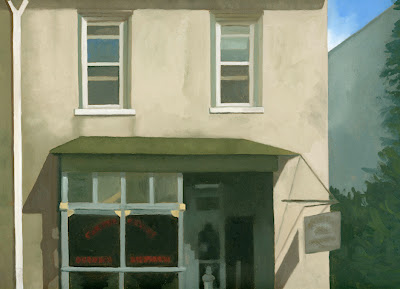 For me buildings always have an expression of some kind.  I was so entranced by the greens and cream of this old building on Germantown Avenue in Chestnut Hill, that I didn't notice the expression on its face.  Eyes set high in its' "head"  with several "teeth" missing, it resembles a smiling jack - lantern.

Posted by postcardsfromthemainline at 9:08 AM No comments: 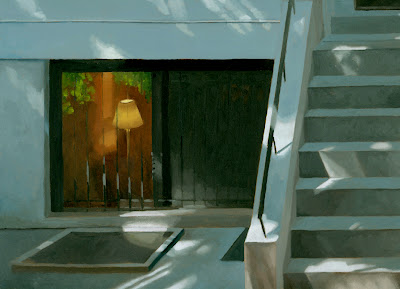 I have always been fascinated by the inside of people's houses.  Rooms without people are an invitation to imagine. For that reason I love to walk the streets of Park Slope because there it is possible to see into windows and doorways and imagine what goes on behind the curtains or the bars.  On this sunny day someone has left the light on, or were they reading and left to answer the phone, or is it a welcoming light for a daytime assignation?

Posted by postcardsfromthemainline at 8:25 AM 3 comments: 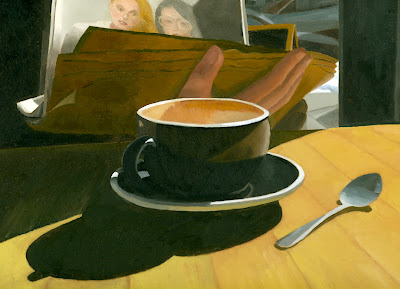 What could be better than a lazy sunny Sunday morning in a friendly coffee shop with the Sunday paper.  First latte finished and not even to the crossword puzzle yet.
SOLD
$350.00

Posted by postcardsfromthemainline at 9:05 AM No comments:

WOMAN AND DOG ON THE CORNER 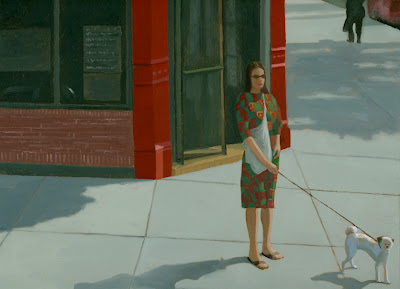 This woman will be standing on this corner in Parkslope in her flowered dress with her little dog forever, and the man in black will never get where he is going.  Such is the power of a painting or snapshot.  We look back at pictures we have saved and they become our history.  The artist and the photographer shape our memories in ways so subtle we don't even notice.

Posted by postcardsfromthemainline at 9:12 AM No comments: 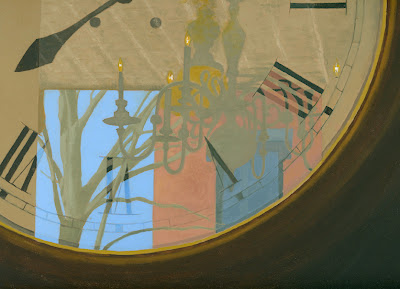 Glass is such a unique surface.  It is transparent and also reflects images.  It takes its identity from that combination, as without seeing what is reflected on the surface or what is behind the glass we would not know it was there.   If there were dirt on the surface we would be aware of the glass but even that is not inherent in the glass itself.
In this painting there is a lot of space, beginning with the sky itself which goes on into infinity, then the tree outside the wall, the ceiling moving towards us, the candelabra, the clock and finally, the edge of the clock, getting right up close.  All brought to us by a piece of glass which isn't actually visable at all.  Is the artist like a piece of glass,  revealing some version of reality, while also showing what's under the surface?
sold
$350.00

Posted by postcardsfromthemainline at 8:31 AM No comments: 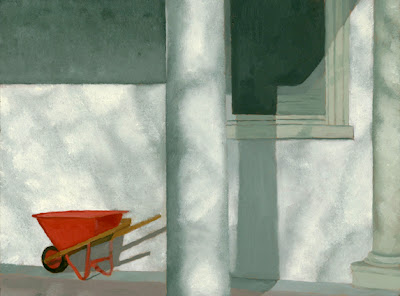 I like to stroll in Bala Cynwyd because of all the wonderful old houses with their many tales ready to be painted.  This little red wheelbarrow is waiting for the imagination of some child to carry - what?  What will this girl or boy dream up to tote around the yard in that semi dream that only childhood make-believe produces.
I can't resist changing William Carlos William's lovely poem THE RED WHEEL BARROW to fit this painting.

So much depends
upon

beside the white
columns

Don't miss this animated version of the original poem on youtube.  I didn't realize when I spotted that wheelbarrow that I was not the only one who found red wheelbarrows resonant with more than their carrying potential.

Posted by postcardsfromthemainline at 8:32 AM 2 comments: 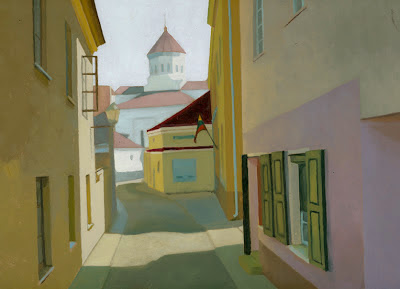 The virtual paintout traveled to Vilnius, Lithuania this month.  I put myself down in the oldest part of town because my father-in-law originally came from the countryside right outside of, what was then, Vilna.  He went to school in the town so I imagined him on these streets.  Once when asked if he would like to go back and visit the old country he said, "Are you nuts"?.
I can see why when I travel along these streets and see a magnificent church around almost every turn.  I imagine Charlie as a young Jew, who was frightened by pograms, gazing from one of these narrow streets at one of these churches and experiencing nothing but anger.  It is ironic that when he came to America he ended up on the south side of Chicago and forever after spoke with an irish brogue.  He came to this country when he was 11, not speaking a word of English, with very little money, eventually working in the stock yards while going to medical school, graduating when he was 27.  He was a tough guy, a man of few words, who was forever grateful to be an American. 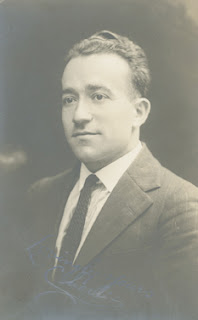 Posted by postcardsfromthemainline at 1:30 PM 7 comments: 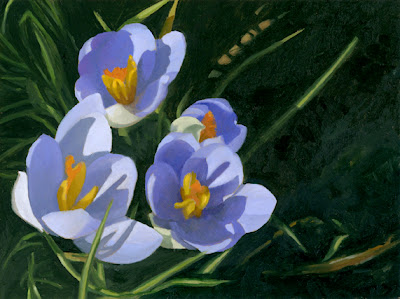 Every year since I began this blog I have painted at least one crocus composition.  I am always thrilled to see the crocus covering the banks of the stream in Merion Park.  This year I caught the light just as the crocus were in the sun and shading their background.  They are perfectly beautiful, pure flowers with their pale violet petals and their yellow and orange centers.  It is almost as if they represent a great sigh of nature as winter gradually passes. 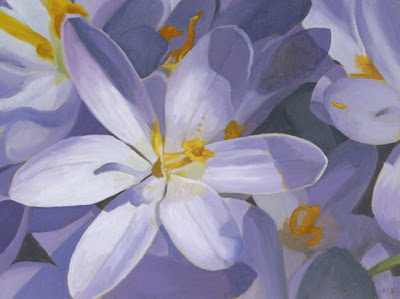 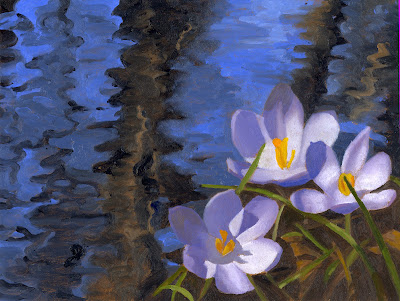 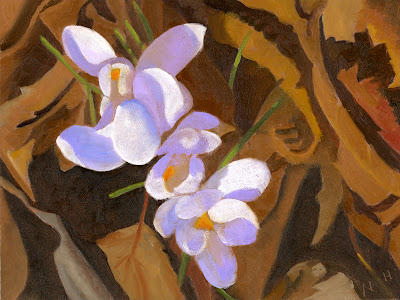 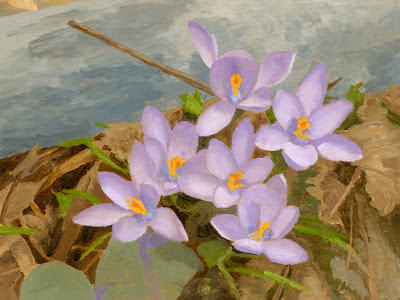 Posted by postcardsfromthemainline at 8:56 AM 4 comments: 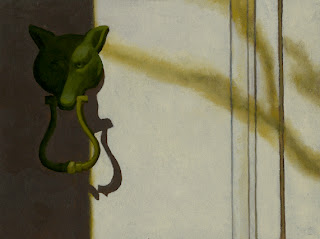 This door knocker seems to be saying, "I dare you to use me".  A wonderful mixed message found on 6th Avenue in Brooklyn's Park slope.  Who lives there, I wonder, a fortune teller, sorceress, or little old lady with a good sense of humor?

Posted by postcardsfromthemainline at 7:27 AM No comments: