WILD FLOWERS IN THE FOG 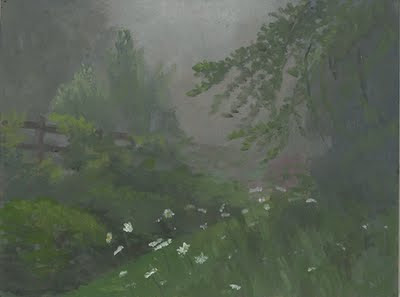 Fog creates a uniform pattern over what we see.  It changes everything very slightly.  That allows us to perceive things as if they were new without causing too much anxiety.  We like things to be in there usual place but also like a fresh look at them.  Fog does just that.

Here are the ever perceptive Benjamin Franklin's thoughts about fog:

"Like a man traveling in foggy weather, those at some distance before him on the road he sees wrapped up in the fog, as well as those behind him, and also the people in the fields on each side, but near him all appears clear, though in truth he is as much in the fog as any of them."

Posted by postcardsfromthemainline at 7:51 AM 2 comments: