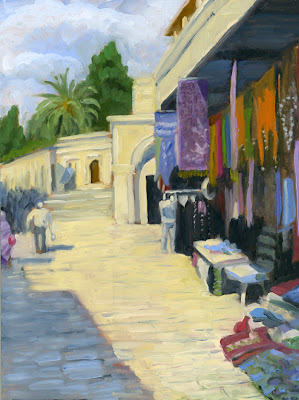 This month the Virtual Paintout went to Jerusalem and I went along for the ride.  This is one of the most visually interesting places we have gone.  I could have painted dozens of places, but finally settled on this scene from the Old City.  After traveling for what seemed like miles in the dark tunnel created by the old buildings, with all kinds of colorful merchandise on display, I came upon this sunlight exit and the end of my journey. 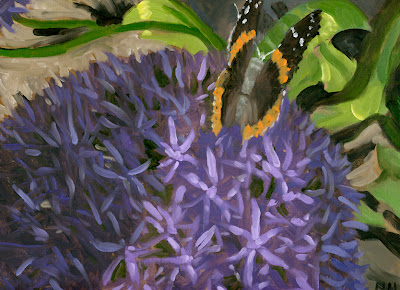 Still trying to get the hang of using more paint, I happened upon this smallish butterfly on one of my beautiful Allium and couldn't help but try to capture it on canvas.
My grandfather had a collection of butterflys carefully pinned to velvet and a net ready to catch others.  At the time I was both fascinated and repulsed by the beautiful display.   Now I wonder how that gentle man could have wanted to kill these lovely creatures.  It was all the fad in those days.  We are such a product of our time, whether we know it or not.  Not sure what kind this one is.  It might be a black swallow tail.  Anyone know?

Posted by postcardsfromthemainline at 7:40 AM No comments: 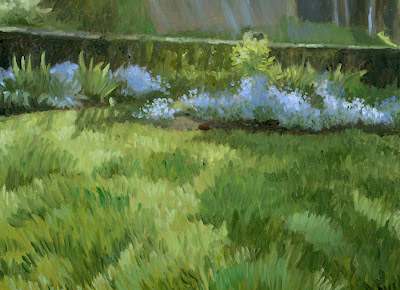 This spring the garden has been glorious.  Everything is blooming its heart out and the aromas are intoxicating.  For-Get-Me-Nots have, unbidden, taken over large parts of what was once my formal garden.  I don't mind a bit as they have been blooming for weeks and even as they fade have a certain elegance.


In a German legend, God named all the plants when a tiny unnamed one cried out, "Forget-me-not, O Lord!" God replied, "That shall be your name."


In 15th-century Germany, it was supposed that the wearers of the flower would not be forgotten by their lovers. Legend has it that in medieval times, a knight and his lady were walking along the side of a river. He picked a posy of flowers, but because of the weight of his armour he fell into the river. As he was drowning he threw the posy to his loved one and shouted "Forget-me-not." It was often worn by ladies as a sign of faithfulness and enduring love.
$200.00

Posted by postcardsfromthemainline at 8:02 AM No comments:

Today, tomorrow and Sunday I will be on the banks of the Skhuylkill painting all day.  I will be there with 21 other artists who are participating in Art in the Open.  They are creating all kinds of interesting work.  Come on down and celebrate this beautiful weather and watch as the art work imerges.  I would love to see some familiar faces.
Posted by postcardsfromthemainline at 8:07 AM No comments: 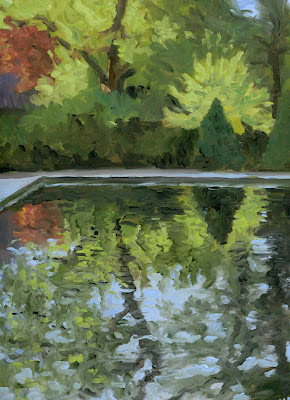 When I went to see the Van Gogh exhibit I had been feeling for a while that  I was enjoying painting a bit less than I had when I began making these small works.  Brushes were getting too small and I was feeling cramped, so I was very receptive to the exhuberance of the paint and texture of Van Gogh's work.  As a consequence I have been  painting slightly larger ( 9" x 12" instead of 6" x 8") and trying to use lots more paint and move around the canvas freely without drawing anything before I start to paint.  Just diving in.  I am enjoying these paintings much more.  I am not using nearly as much paint as Van Gogh did but perhaps I will work up to that.  Let me know what you think.  Unfortunately the actual dimension of the paint doesn't really show in a reproduction.  That's why you have to go to Museums and art galleries to really see what paintings are all about.
Posted by postcardsfromthemainline at 8:05 AM 1 comment:

If the video didn't work go here and then down to two versions of the PECO display.

Posted by postcardsfromthemainline at 7:51 AM No comments:

Email ThisBlogThis!Share to TwitterShare to FacebookShare to Pinterest
It's Friday and I have not posted any paintings all week although I am back to work.  I am using lots more paint after seeing the Van Gogh show and it takes a long time for these paintings to dry, so I have not been able to scan them in.  Meanwhile I submitted a 30 second video for Peco's Crown Lights display which runs every Friday night.  Not sure if it made it into this Month's group of light shows and have not been able to catch any Friday this month and will not be able to see tonight's lights either, so if you are in Philly look up and see what's showing.  Let me know what you think about the whole thing.  I really love getting your comments.  Here is my entry.

If this video doesn't work go here and then to PECO May.  You will see two versions of the video.


Posted by postcardsfromthemainline at 7:26 AM No comments:


I finally got to see the Van Gogh show at the Philadelphia Museum on Saturday.  Too late to recommend others see it, but not too late to share my impressions and hopefully get yours.

My first impression was that standing in line like cattle for close to 45 minutes is not only tiring but demeaning in a way.  Is that the best way to deal with these big shows?  Could we not be parading around the Museum in a line looking at art instead of being confined to a small space with nothing to do but stare at the back of somebody's head?

By the time I finally got into the gallery my legs were ready for a sit-down.  The space was crowded and my first thought was that I should leave.  What was the use of standing so far away that I could not see the art work?  I got a grip on myself and soldiered on, popping in front of people every now and then to get up close to the paintings which definitely demanded an intimate view.  Even the title of the show suggests that.  As usual there were more people standing in front of paintings that were described in the recorded information supplied by the earphones, so that left much of the art  minimally obscured.  I opted not to listen to the recording as I was there to see and did not want to be distracted.  It is always possible to read about the artist at another time but the physical presence of the art is what I was there for.

And what a presence it is!  How did Van Gogh do it?  Up close, the distance one would assume would be needed to actually paint the work, he could not possibly see the whole work and it is obvious that the whole work was constantly on his mind as the brushstrokes are all orchestrated to design patterns that make the whole composition sing.  Did he have extremely long brushes?  He obviously constantly moved back and forth from near to far as he worked, but still I was amazed at the way the paintings came together from a distance and were so unrecognizable, though fascinating, up close.

It is no wonder he always needed money, as he must have used entire tubes of paint for each painting. The thickness of the paint and the constant motion the brush strokes display are almost like tapestry, albeit an impossible weave.  I have seen Van Gogh's work many times over the years and yet this show was still a revelation.  One of the haystack paintings brought me to tears.  There was something about the color that was simply sublime.

I only wish it would be possible to see these superb works in a less crowded setting.  I also wish the show did not end in the shop with all the shirts and ashtrays bearing reproductions of the artwork.  I understand the desire to own some part of the art, but it doesn't work.  It is the experience that matters not the cheap imitation you bring home which can only be a reminder of the inability to reproduce magic.
Posted by postcardsfromthemainline at 7:27 AM 2 comments: 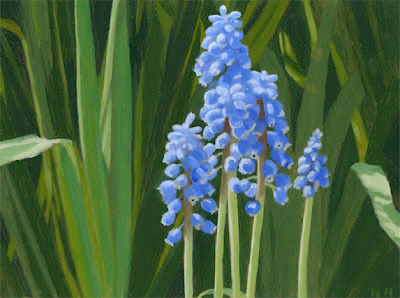 When I was growing up I lived on a farm.  In order to get to my friend's house I had to cross through cow grazing meadows.  This was somewhat hazardous as I had to watch out for cow "paddies" on the way and was never sure how friendly those great beasts were.  One day in early spring I was on my way for a visit when suddenly I saw at least an acre of Grape Hyacynths spreading before me.  The cow paddies had turned into a glorious show of indigo.  Like Wordsworth and his dafodils I will never forget that experience and often summon it up when "in vacant or in pensive mood" to bring joy to my spirit.


Posted by postcardsfromthemainline at 7:59 AM 2 comments: