Here is a link to the latest in my video series, SQUARES LOOKING FOR A HOME.
This one is called IMPERATIVE as the squares are moving inevitably towards their final destination.
http://youtu.be/aNzPdYW7RT0
Here is a link to the first video in the series EQUIPOISE.
http://youtu.be/a9AQ8r0o3b0
Posted by postcardsfromthemainline at 2:29 PM No comments: 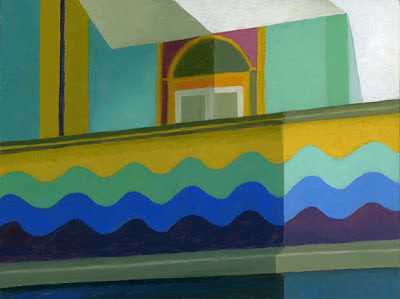 Back to traveling the virtual roads on Google maps.  I found this wonderfully painted motel on the Lido in Italy.
Many, many years ago my family camped on the Lido beach on our way to Venice.  I think these joyful colors capture the feeling of that time very well for me.

Posted by postcardsfromthemainline at 7:07 AM No comments:

Posted by postcardsfromthemainline at 7:24 AM No comments:


Okay, here is where the trumpets blare and the fanfare announces the finished piece.
If you are still with me on this design journey, we have reached our goal.
This piece again created in Flash started with music as a guide to the length of the piece.  I decided I wanted to have each square be one measure of the music so I knew how long it had to be.  I found a piece of music that I thought would suit the idea and began placing the squares on the screen in the order that they would eventually reach, after a small journey.  The journey ended up being quite interesting (at least to me).  Some cool things happen along the way and it all turns out as planned and then some.
In the middle of the piece I decided the music I had chosen did not say what it should, so I had to go searching again, but this time I found just the right tone with the Satie.  The animation works on the idea of imbalance and resolution and the Satie has an oriental feel to it that is just what I wanted.  It also has a very regular beat which fits the design.  The whole thing turns out to be quite calming and meditative.  It does take almost 4 minutes so put your feet up, have a martini at the end of the day and give it a try.

Posted by postcardsfromthemainline at 7:39 AM 3 comments:

My first try at a video that might show the joy of arranging colors didn't work out because I was not able to capture the screen in Photoshop the same way each time and presenting colors randomly was not visually satisfying.  So I decided to play a bit in Flash to see what might work there.
I didn't have a plan, just wanted to fool around to see some affects I have not tried before.
After a pretty short time I decided I liked the way the squares moved around and the way they came on to the screen but I definitely wanted to have a specific plan in the next attempt.
The music in this piece and yesterday's was chosen after I made the video just for fun.  It is music that I can use, as it is copyright free, a very nice feature.  I have a collection that I store in itunes and in this case I tried out those pieces that were the same length as my animation and found ones that seemed to be in the same spirit as the video.
Here is the the "play" video.
Tomorrow - the final version.

Since I last posted I had an opening and a new idea for some visual music.  I did not paint all last week, in part because I was busy getting ready for the show, planting and weeding my garden and working on the new idea.
I have not talked much about the process of making art on this blog but since I have at hand 2 examples of how this idea evolved I thought I would give it a try.
After posting HAPPINESS ATTACK I got to thinking that what thrills me about working with color is that, given any set of colors, there is always an arrangement that seems "right," and it is the process of finding the arrangement that is as good as looking at the final product.  So making a video of the process might give an idea of that fun and maybe be fun to watch.
I decided to go with the colors in this photo because I really don't know how I can paint this scene again yet, although I love the colors and every year I do paint this tree, as I planted it to celebrate my mother's birthday, April 15.

At first I decided to just randomly grab colors in Photoshop and place them in squares in a grid in imovie.  I like the transition option called "cross dissolve" which does not exist in Flash so I decided to make the squares appear and move gently into each other in this very time consuming way.
I liked the way it looked at first but I soon realized that it was going to be almost impossible to "screen grab" the colors in Photoshop and get each grab exactly the same.  I also had not arranged the colors previously so unless I could scoot them around they would not be in order.   I continued to fill in the squares just to be sure random wouldn't work.  It didn't........ so I simply morphed the arranged colors on at the end.
Here is that video.  Don't worry if you get tired of looking at it pretty quickly, I did too.  It is only 2 minutes and 18 seconds so you might like to see the whole thing however.
http://www.youtube.com/user/illuminata?feature=guide
Second try tomorrow.

Posted by postcardsfromthemainline at 12:04 PM No comments: