After the Civil War, Arkansas like many of the other southern states went through a period of turmoil both economic, because of lack of free labor, and political as there were mixed opinions about who should be allowed to vote.  The Brooks - Baxter War which was a struggle over voting rights and leadership of the state resulted in considerable weakening of the Republican party and the Democrats held the political edge for the next 90 years. 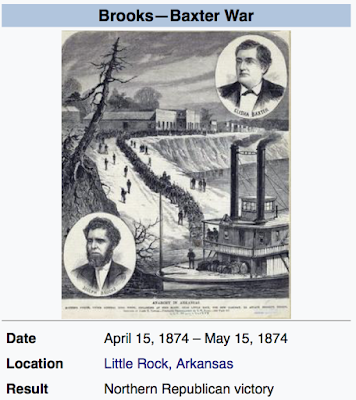 Posted by postcardsfromthemainline at 8:49 AM No comments:

Arkansas was one of the few Southern states that was divided in its opinions about slavery.  In the Southeast where cotton could be grown there was enthusiasm for slavery as it was felt it was the only economically feasible way to grow crops but in the Northwest, where subsistent farming was the norm, slavery was not used and therefore not supported.  So initially Arkansas joined the Union.  It was only after Lincoln sent troops to quell the rebellion at Fort Sumter that Arkansas joined the Confederate States.

Posted by postcardsfromthemainline at 8:07 AM No comments:

Evolution from the Territory of Arkansaw to State of Arkansas, 1819–1836

"Napoleon Bonaparte sold French Louisiana to the United States in 1803, including all of Arkansas, in a transaction known today as the Louisiana Purchase. French soldiers remained as a garrison at Arkansas Post. Following the purchase, the balanced give-and-take relationship between settlers and Native Americans began to change all along the frontier, including in Arkansas.[54] Following a controversy over allowing slavery in the territory, the Territory of Arkansas was organized on July 4, 1819.[c] Gradual emancipation in Arkansas was struck down by one vote, the Speaker of the House Henry Clay, allowing Arkansas to organize as a slave territory.[55]".....Wikipedia

There was a town called Napoleon in Arkansas near the confluence of the Arkansas and Mississippi river.  However due to poor planning on somebody's part in 1863 a channel was cut through the soft land that inadvertently directed the river waters toward the town.  It was finally submerged in 1874 when the banks of the Mississippi River burst through and destroyed the last of the once-thriving port.  I imagine we will be seeing a lot more of that sort of thing in the near future. 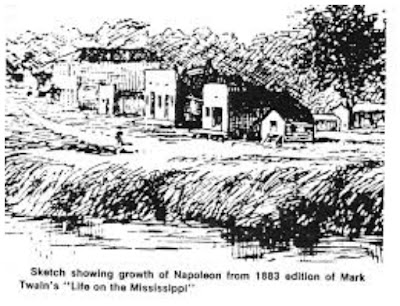 Posted by postcardsfromthemainline at 12:21 PM No comments:

The first European explorer to reach Arkansas was Hernando de Soto in 1540. He crossed the Mississippi and marched across Central Arkansas and the Ozark Mountains.  After finding nothing he considered of value and encountering native resistance the entire time, he and his men returned to the Mississippi River where de Soto fell ill.  From his deathbed he ordered his men to massacre all of the men of the nearby village of Anilco, who he feared had been plotting with a powerful polity down the Mississippi River, Quigualtam.  His men obeyed and did not stop with the men, but were said to have massacred women and children as well.  He died the following day.  His body was weighted down by sand and he was consigned to a watery grave in the Mississippi under cover of darkness.  For some reason he had 700 hogs at the time of his death, even though his men were starving because all they had to eat was maize stolen from Native Americans.

And so it seems once again we find that in order to remembered in the history books you don't have to be wise, kind, a good leader who cares for his men, or particularly clever, just march around claiming territory from people who have inferior armaments. 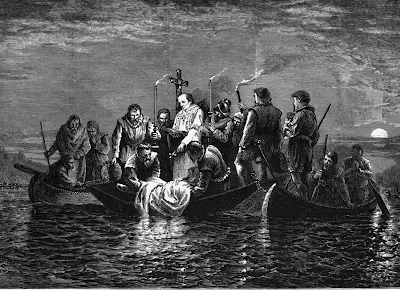 THE BURIAL OF DESOTO
William A. Crafts


Posted by postcardsfromthemainline at 4:03 PM No comments:


It's April.  Time to travel to the next state which is Arkansas.  Located in the South, bordering Missouri, Oklahoma, a bit of Texas, Louisiana, Missisppi, and the tip of Tennessee. 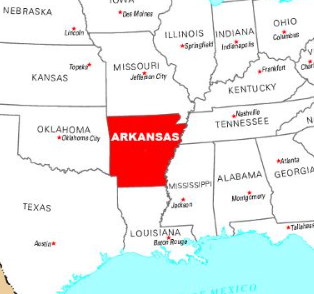 The original inhabitants of Arkansas were the Caddo, Osage, and Quapaw Indians.

Here are some paintings of the Osage done by the painter George Catlin. 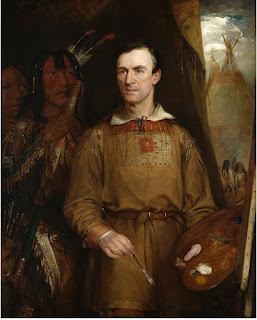 
Catlin was a fine painter who had a brief career as an attorney before he began his life's work recording Native Americans.  He was inspired initially by his mother who told him stories of her capture by an Indian tribe as a girl, and later by the artifacts brought back by Lewis and Clark.  He visited several tribes and did portraits over a period of many years. 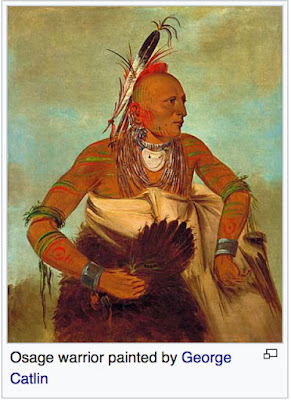 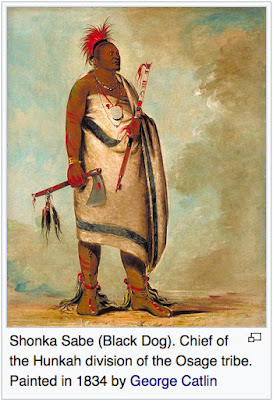 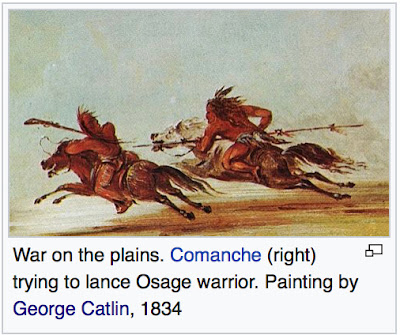 I know George Catlin from his appearance in several Larry McMurtry books.  He was a character in the Berrybender Narratives.  He is also spoken of in the historical novel The Children of First Man, by James Alexander Thomre.  In the 1970 film A Man Called Horse his work is cited as one of the sources for its depiction of Lakota Sioux culture.  His works also figure repeatedly in the 2010 novel Shadow Tag by Louise Erdrich.  There he is the subject of the unfinished doctoral dissertation of character Irene America.

During his lifetime he was unable to sell his work to the US Government but now it resides in the Smithsonian among other places including the University of Pennsylvania Museum of Archeology and Anthropology.

Posted by postcardsfromthemainline at 3:48 PM No comments: