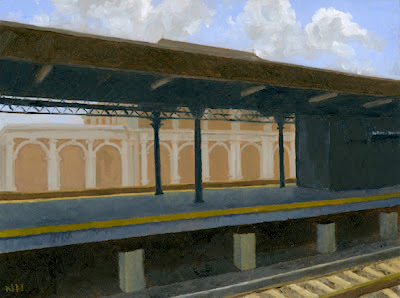 From the Amtrac train window North Philadelphia Station looks as if it is closed for good and I have never been on a train to New York that stopped there.  Upon checking the Amtrak schedule I see you can board twice a day, but there is only one coach seat available for all the dates I checked and that is at 5:57 in the morning.  Coming from New York you can get off there 3 times a day but again only one seat available.  Seems Amtrak doesn't want to stop there.  Checking further I see on Wikipedia that there are around  389 people a year who use the station so I can see why they don't want to stop as a routine, but the schedule would seem to make that inevitable.
Just one of the mysteries of train travel I suppose.
When I was in my early teens I went to New York on the train several times and since we lived in the country my parents picked me up at North Philadelphia Station since it was the closest to our farm.  I remember it as being a very scary place, especially at night, as it was pretty run down, there was hardly anyone who got off the train even then, and it was very poorly lit.  It was refurbished in 1999 and looks like so many places that have been fixed in time, if not fixed for living... like a ghost.  It is on the National Register of Historic Places.

"This just in -  someone was shot near North Philly Station just after noon today.  Maybe it is just as well there is limited access to this spot."