While cleaning out my entire house (4 floors, including basement).  I found a lot of old art and old writing and have decided to write the story of my life with pictures as I produced them for my grandchildren and great grandchildren.  This is a sample that I have changed a bit for the blog.  Unfortunately I don't have the picture described but I do have a small water color that probably came from that time. 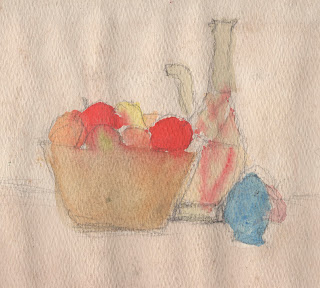 When I was around 6 or 7 I took a painting class at the local library.  It was taught by an enthusiastic young man who took a special interest in my "work".  I think I was pretty good at watercolors and able to get the way things looked, sort of, with not too much messiness. This has to be unusual for a child that age.  He insisted I have a "one girl show" at the library to celebrate my “genius” as the local newspaper put it. In that show there was a landscape with only the head of a horse in the middle.  My enthusiastic teacher, who was probably just a young art student, said this was part of my talent. Meaning that I was free to put just the head of the horse in the picture because I knew that was all that was necessary to indicate “horseness”.  I thought that I had only included the head because I had no idea  how to draw the rest of the body.  I didn’t tell him that.  I liked his idea better.I think this small incident pretty much defines for me everything there is to know about what other people think an artist is about and how that influences what artists say to other people about what they do.
But, suppose he was right.   It certainly is true that children, if they have not been overly praised or scolded about their art are freer to do what they want to than they will be as they learn more about what "art" is.  It is also true that the head of a horse does indicate "horsiness" and I felt free to put it in the painting without the body, even though I would have included the body if I knew how to draw it. When an artist in full control of the power of expression chooses to leave something key out of their work to create a certain feeling, that is art.  When someone simply doesn't know how to draw and so only includes what they can do comfortably...not so sure.  A lot of outsider art has this feel to it and often it is very moving.  If this concept is to hold water then art education is a big mistake and everything that is taught except how to wield a brush or sharpen a pencil leads to the burying of "talent".
What do you think?

Posted by postcardsfromthemainline at 10:38 AM No comments: