Most of Alaska is unpopulated, at least by people.

65% of Alaska is owned and managed by the US Bureau of Land Management.  This includes a multitude of national forests, national parks, and national wildlife refuges.  Of the remaining land area, the state of Alaska owns 101 million acres. A portion of that acreage is occasionally ceded to organized boroughs.  Smaller portions are set aside for rural subdivisions and other homesteading related opportunities.  The University of Alaska, as a land-grant university, also owns substantial acreage which it manages independently.
Another 44 million acres are owned by 12 regional, and scores of local, Native corporations created under the Alaska native Claims Settlement Act of 1971. These corporations hold title but cannot sell the land.  Individual Native allotments can be and are sold on the open market, however.
Various private interests own the remaining land, totaling about one percent of the state.  Alaska is, by a large margin, the state with the smallest percentage of private land ownership when Native corporation holdings are excluded.

Here are some pictures from one of Alaska's Recreation Sites located in the South Eastern part of the state.

I was attracted to it because of it's name: THE CLEARWATER STATE RECREATION SITE: 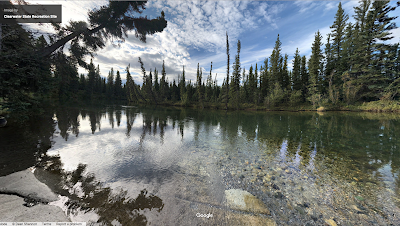 Posted by postcardsfromthemainline at 2:28 PM No comments:

Posted by postcardsfromthemainline at 1:22 PM No comments: