After Europeans started flooding into Alabama.  The Indians living there became alarmed as their lands were being usurped.  Many were decimated by diseases brought by the settlers.  The Creek Indian tribe who occupied most of the territory were split in their allegiances.  Tecumseh, the great Shawnee leader, tried to unite the Creeks against the settlers who wanted the Indians to adopt trades in order to better serve their needs.

Spain and England sided with those waring in opposition to the settlements.  Andrew Jackson lead the settlers and was allied with Choctaw, Chickasaw, and Cherokee Creeks who were often of mixed blood with the settlers.  This was the first Indian war and was part of the War of 1812. 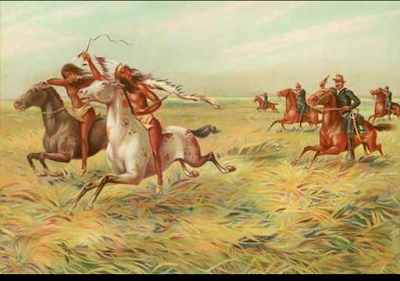 
The Creek War ended in 1814 when the Creeks were forced to sign the Treaty of Fort Jackson, ceding some forty thousand square miles of land to the United States.  The Indians who fought with Jackson were also soon forced to cede their lands.  I wonder what would have happened had the Indians stuck together.

By 1830 the removal of almost all the native Alabamans was completed though a few did remain such as the Poarch Band of Creek Indians who somehow escaped and remain there today.

Posted by postcardsfromthemainline at 2:23 PM No comments: