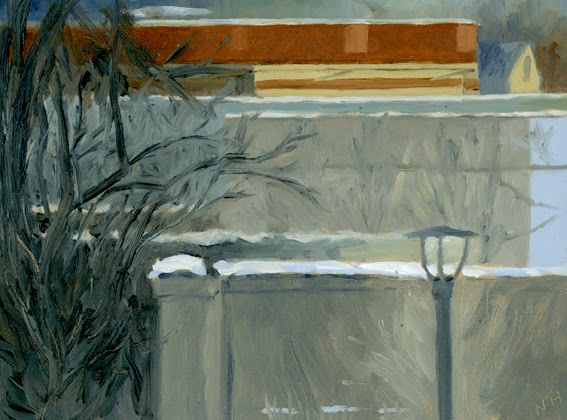 Another scene from the train, this formerly quiet little square that I painted a few days ago (CLOSED )is gradually giving way to nature.  We fight it back every chance we get and carve it into symetries we can grasp in our gardens, but it is relentless.  When humans are forgotten it will rage on.  We forget, to our peril, that we are only a very small part of the miracle of life on this planet.

Posted by postcardsfromthemainline at 7:50 AM No comments: 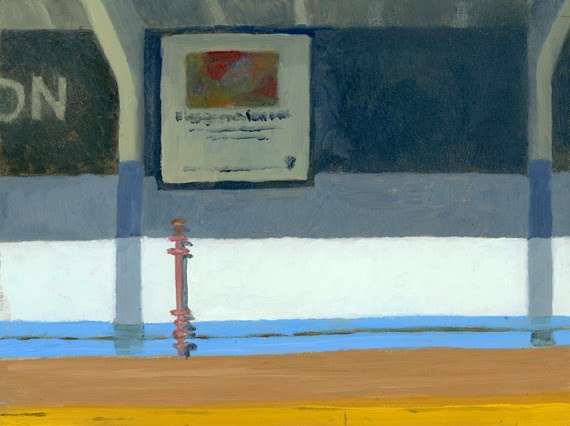 Lately I have not been drawing in the images before I paint.  This leads to wavey lines that used to be straight and proportions that are less than perfection.  As a result of not following the lines I can use more paint and get into the feeling of the brush rolling along the canvas.  In this painting of the empty train platform I especially enjoyed painting the funky pink pipe.

Posted by postcardsfromthemainline at 8:55 AM 2 comments: 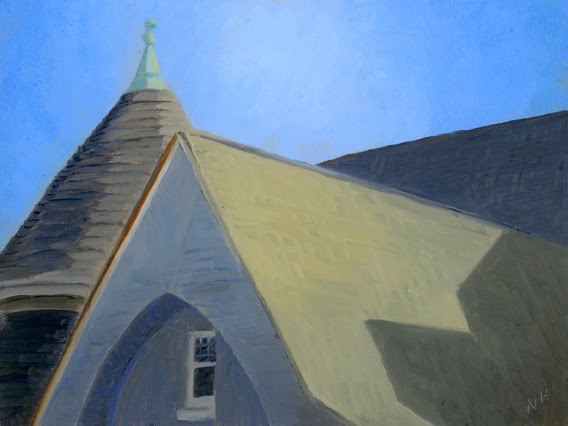 My destination when I go to New York is always Brooklyn, to visit my children and grandchildren.  I love the old Victorian houses in Ditmus Park.  This one is a symphony in shades of grey.  I wonder who lives in this room near the top.

Posted by postcardsfromthemainline at 11:25 AM No comments: 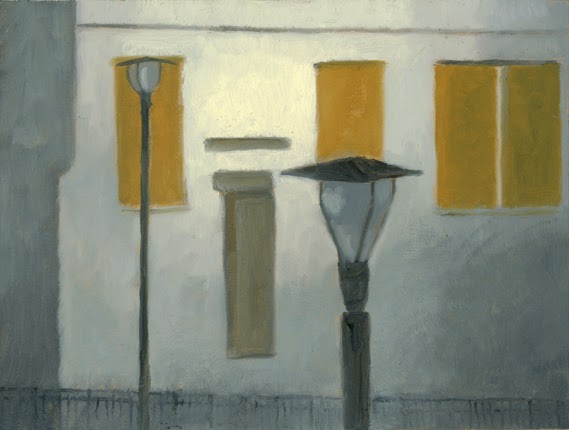 Still on the train, we stopped next to this square that could have been from a French town.
This odd building with shutters closed and a narrow door with no stairs seems right out of a Hitchcock movie.

Posted by postcardsfromthemainline at 7:19 AM No comments: 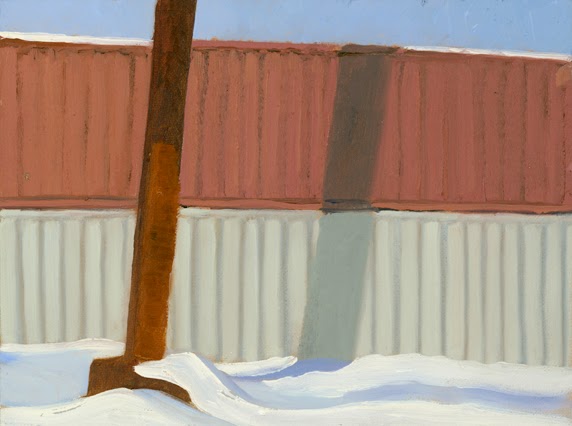 Back on the train to New York from Philly this simple pleasing composition of a corrugated red and white tin fence, a rusty pole and its shadow appear as we hurry by.   It's an excuse for some juicy paint, which unfortunately you can't see in this photo.

When I was around 6 or 7 I took a painting class at the local library.  It was taught by an enthusiastic young man who took a special interest in my "work".  I think I was pretty good at watercolors and able to get the way things looked, sort of, with not too much messiness. This has to be unusual for a child that age.  He insisted I have a "one girl show" at the library to celebrate my “genius” as the local newspaper put it.

In that show there was a landscape with only the head of a horse in the middle.  My enthusiastic teacher, who was probably just a young art student, said this was part of my talent. Meaning that I was free to put just the head of the horse in the picture because I knew that was all that was necessary to indicate “horseness”.  I thought that I had only included the head because I had no idea  how to draw the rest of the body.  I didn’t tell him that.  I liked his idea better.

I think this small incident pretty much defines for me everything there is to know about what other people think an artist is about and how that influences what artists say to other people about what they do.

But, suppose he was right.   It certainly is true that children, if they have not been overly praised or scolded about their art are freer to do what they want to than they will be as they learn more about what "art" is.  It is also true that the head of a horse does indicate "horsiness" and I felt free to put it in the painting without the body, even though I would have included the body if I knew how to draw it.

When an artist in full control of the power of expression chooses to leave something key out of their work to create a certain feeling, that is art.  When someone simply doesn't know how to draw and so only includes what they can do comfortably...not so sure.  A lot of outsider art has this feel to it and often it is very moving.  If this concept is to hold water then art education is a big mistake and everything that is taught except how to wield a brush or sharpen a pencil leads to the burying of "talent".

What do you think?

Posted by postcardsfromthemainline at 8:25 AM 6 comments: 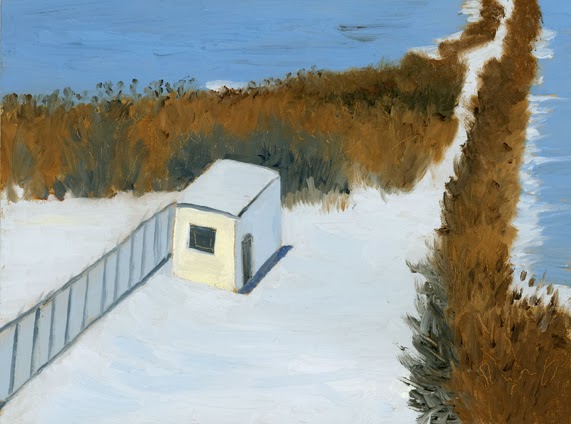 If you look out the window of the train, as you ride from Philly to New York, you will see more than one of these small buildings along the tracks.  Not sure what their use is.  Could be small people live there to make sure none cuts too much of this rich grass or goes swimming in the freezing water? Storage house for skis?  Playhouse for lost children?

Posted by postcardsfromthemainline at 8:20 AM No comments: 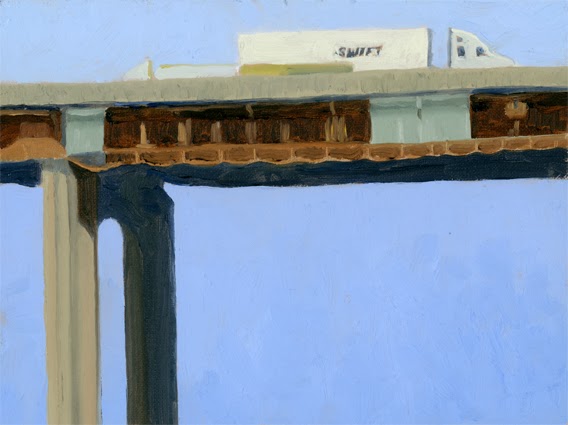 Still traveling on the train I find many bridges near the train tracks cut out interesting shapes in space.  Here the sky is sliced into a pattern of abstract patchwork as the Swift truck cuts its path over the bridge.

Posted by postcardsfromthemainline at 7:46 AM No comments: