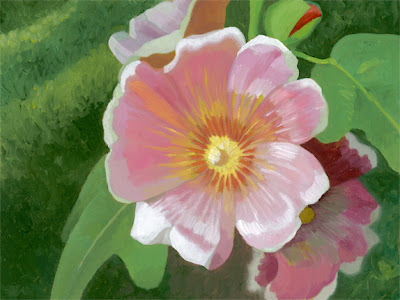 Hollyhocks are the flowers I associate with my childhood.  I think they were the first flowers I actually became aware of.  In the fog of early consciousness I was attracted to their centers and then frightened by some unexpected movement inside - probably bees.  I still retain this simultaneous attraction - repulsion feeling whenever I come upon them.
That is probably why I only have one plant in my garden this beautiful soft pink.
Recently I visited some friends who had the most spectacular Hollyhocks I have ever seen surrounding their very extensive, beautiful gardens.  They were at least 8 feet tall and blooming like teenagers. 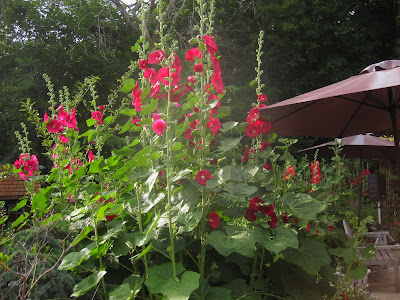 Posted by postcardsfromthemainline at 8:00 AM No comments: 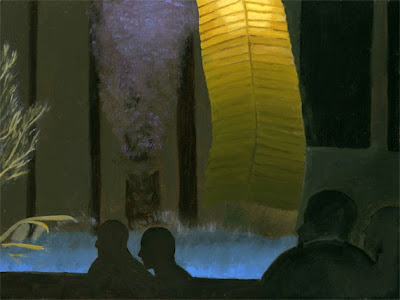 Sang Kee, my favorite neighborhood restaurant has everything,  great food, pleasant friendly servers and lots of happy bustle as it is a favorite of lots of people.
There is a lot to be said for being surrounded by other people who are having a good time.
sold
$125.00

Posted by postcardsfromthemainline at 7:25 AM No comments:

Yesterday's painting "Iris in the Morning" has been chosen as a pick of the day on the Daily Paintworks facebook page.
Check it out!
https://www.facebook.com/dailypaintworks
Posted by postcardsfromthemainline at 11:31 AM No comments:

Iris in the Morning 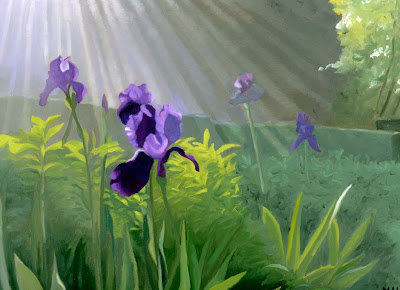 I painted this in the spring but have not posted it because I was uncomfortable with it.  It has a religious feel.  I am not religious. When I am outside in my garden or in any grand natural space I do feel connected to the universe.  I worship the "earth and the fullness thereof" but not necessarily "those that dwell therein" and though I wish I could believe that there is a "father" up there looking after me, I simply can't.  The beauty of the words of the Lord's prayer are a comfort.  They were composed by someone with a great heart and fine sensibility.  I believe in the possibility that humans might be fair and just, but organized religion has not worked that magic.  It is time for humans to recognize they are responsible for the evil and the goodness in the world not God or the Devil.
Why am I finally posting this painting?  Because looking at it over a few months has made me think.  Those rays of sun are generative and can be destructive.  They can nurture our garden or wither it.  There is all you need to know about life in the garden.  For me this is the place of worship.
Posted by postcardsfromthemainline at 8:11 AM 3 comments: 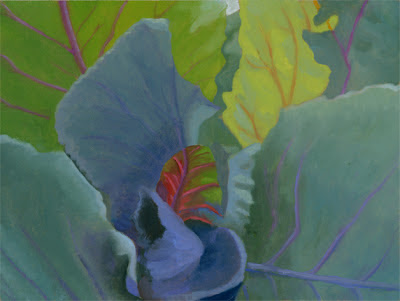 The weather is too hot for most of the day but in the very early morning, when the dew is still clinging to the vegetables it is glorious outside.  Here the sun peaks through the leaves of the cabbage and for a moment all is right with the world.

Posted by postcardsfromthemainline at 8:39 AM No comments: 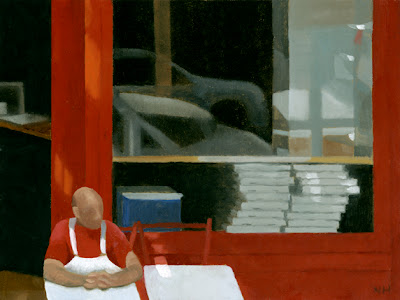 On a recent trip to Brooklyn I spotted this pizza maker enjoying the passing parade on a sidewalk in Park Slope.