Formal Garden in the Fog 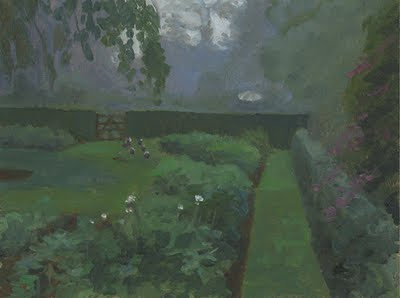 The formal garden is just beginning to come to its second flowering.  The tulips, daffodils and iris are over, or almost over.  You can just see a few in the middle distance.  The peonies are just starting to open up in the foreground.

Continuing the fog metaphor, Joseph Conrad said,  "It is not the clear-sighted who rule the world. Great achievements are accomplished in a blessed, warm fog."

This is an interesting quote.  It is certainly true that the clear sighted are often not the ones in control of ruling the world, and it may also be true that some great decisions are made in a blessed warm fog, but when people who are not clear sighted rule, the fog of their decision making does not appear to be "blessed".


The leaders of the Middle East for the past 20 or 30 years certainly have not been making decisions in a "blessed" warm fog.  Short sighted rulers seem to be governed by a hot fog of self serving megalomania. They remain in power because those governed are in the midst of a fog of fear and resignation.  The internet has proved, in this case, to be the sun that broke through that fog and gave courage to those oppressed.  Suddenly they saw the long view and the fog lifted.  What happens as a result of this sudden break with their past reality is bound to be very chaotic, as we don't adjust easily to such great rents in our sense of what is real.