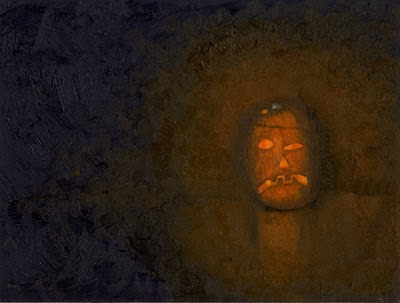 October is cider, spiced wafers and Halloween.  It is a wonderful holiday as it gives kids a chance to experience life in a new light.  Two things I remember as a child at Halloween.  First when I was 7 or 8 ringing doorbells and running away to hide in the bushes on Mischief night.  The police arrived with search lights and we got away just in the nick of time but I still remember the panic and have been a law abiding citizen ever since.    The second is when I lived in the country and was around 13 going out on Halloween dressed up as a hobo. Two friends and I walked down a long dark lane to a house way off the road to trick or treat.  The people who answered the door obviously did not anticipate anyone but were game enough to offer us hot chocolate.  They had a very run down establishment and were not given to casual chatter.  We of course had to accept their 'treat'.  So there I sat, dressed as a hobo with people who were close to that state themselves, drinking their hot chocolate.  It was food for thought to say the least.

Posted by postcardsfromthemainline at 7:58 AM

Hi Nancy, nice to meet you. Your piece has a Spooktacular composition and striking luminary quality. That pumpkin face is so attractive. I'm glad you participated in this month's challenge and hope you paint with us again.
I believe you still have two skull guesses left before the giveaway.

I wonder how you were able to create the effect of the diminishing light? What is your medium? This is very spooky with such and element of the unknown. I love the expression of the pumpkin, like it's almost too tired to be mad anymore. And the slight reflection beneath it, propping it up. Great work!

Thanks for your appreciative comments. I have been waiting a year to paint this. My husband carved it and it was getting rather old when I painted it - like me. I liked that. It is oil paint.

Very spooky painting, I like the warm glow you created around your mysterious Halloween pumpkin!

I almost painted a a pumpkin I carved for this challenge but it looked too happy so I resorted to my spooky black cat.

This is a nice moody piece. I like the other work on your blog as well.